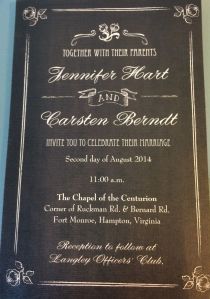 The next day found us waking up early in the Motor Lodge. The rain had mercifully stopped and while I wouldn’t call it a “sunny” day, we were grateful for what we got.   I have a dream of a husband who, when we travel, wakes up early, leaves the room and returns to wake me up with a steaming cup of coffee.  If there was nothing else to love about him, this would be enough (lucky girl that I am, there IS, and this is just a bonus).

So we popped over to the restaurant The Farmer’s Daughter, which advertised Southern Home Cookin’.  Why waste a “g” in a word if you don’t need to?  It was a decent diner-like place for breakfast, with friendly people who welcomed us in that slow, southern Virginia drawl that is perfectly unique to that part of the country. I’ve never heard that dialect anywhere else.

We hit the road and headed to Fort Monroe, VA. The wedding was held at The Chapel of the Centurion, Chapel of the Centurion.  Fort Monroe is an old Army Fort that dates back to the 1600’s, and remained in Union hands during the Civil War.  It operated as an Army Base until 2011, and my father worked there after he retired from the Army.  The Chapel has been restored to its original beauty. It’s a simple, peaceful structure that has been standing on that spot since 1856 or so. Incidentally, in 1933 the chapel sustained some fire damage during a funeral for a dead man who had previously told the chaplain “If I went to church the chapel would burn up”. Hee hee.

Anyway, we pulled up to the church and I could already see lots of family making their way inside. We patted down our frizzy, humidified selves and followed them in. All weddings are special, but truly this day was one I had been looking forward to for a very, very long time.   Let me tell you why:

I have five sisters. The first sister’s wedding was about 40 years ago (I was still in Junior High).  The most recent sister wedding was in the early 1990’s, so it had been 20 years since a sister got married. Jenny is my youngest sibling, 7 years younger than I, and for 20 years, she and I were “The Spinsters”.   I wore that moniker like it was my job, since I never planned on getting married, and I don’t think Jenny minded it too much either.  But stuff happens, and last December I surprised myself by saying “I Do” at the age of 53, and here at age 46, Jenny was ending this generation of spinsters.

Jenny and Carsten met when they were in a community theater production of “Crimes Of The Heart”. They were the same age, neither had been married before, and the story goes that each was so disillusioned with relationships that Carsten had vowed never to ask anyone out ever again. SHE was going to have to do the asking, and that’s just what Jenny did, because, well, she’s courageous that way. I remember hearing about Carsten before I met him, but wasn’t totally prepared for how, …er…, NORMAL he was. (And I can hear Carsten now saying ‘Hey you take that back. I am NOT normal!”).  Now, we love Jenny. She’s super smart, witty, creative, and cute, but let’s be real. She doesn’t exactly operate in the mainstream. Sometimes you would swear she’s channeling Rain Main, and I don’t mean the Tom Cruise character.  So the fact that she met someone who also loves the theater, has the same strong family values, and most importantly, the same, what I call “REAL” Christian values, and that they met at this time in their life, is quite a little miracle.  I was beyond thrilled for this day to come.

We entered the church and saw lots o’ family:

My sister Fritzi Foster with her 2 kids Andy and Emily, who always class up the place, from Sturbridge, MA:

Jose A Olivero, who just got married in January to the lovely Yeffeny, from Alexandria, VA: 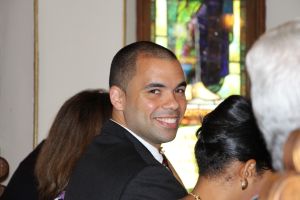 My littlest nephews (who are not little anymore..waaaah!) Tobin and Kelsey Lambert, from Albuquerque, NM:

The officiant, Dave Johnson, is a close friend of Jenny and Carsten’s, and you could just feel his joy at this day, too.  The ceremony was very sweet and so “them”. 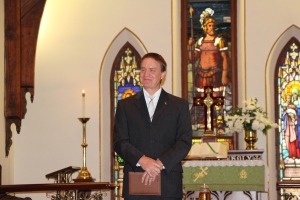 The attendants were all family, too.  Carsten’s sister-in-law Lynn Berndt, from the Chicagoland area, and my brother Dan from Norfolk, VA:

Carsten’s brother Mark from Chicagoland, and my sister Joanie Ford from Suffolk, VA:

My beautiful mother Joan, and my dashing father, Ed, from Norfolk, VA: 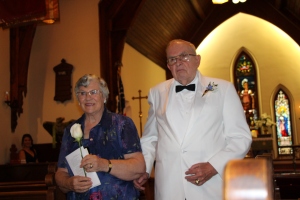 The best part of a wedding (besides the reception) is when the bride is walked down the aisle.  I know it doesn’t look like it, but my Dad really IS happy.  Can I also point out here that my mother made that wedding dress?  Jenny had a vision, took it to mom, and it became a thing.

When our tears had dried and Bobby and I confirmed that we had not in fact, set the church on fire, we all headed to the Langley Air Force base Officer’s Club for the reception.

There was much eating, drinking and dancing, including some updated Electric Slide type line dances, which, to be honest, I am normally too cool for.  But it’s a wedding.  Cheese is allowed.

The first highlight of the reception was the Dad-Daughter dance.  My father has been having some trouble with his hip, so when Jenny asked him if he would be okay to dance with her at her wedding, he reportedly said “Yes, as long as it’s not to ‘Daddy’s Little Girl'”, for which we were all grateful.  Instead, Jenny surprised him by choosing “More I Cannot Wish You” from the musical “Guys and Dolls”.  It’s a song my father has always wanted to sing in a show.  He sang it out loud and proud while he danced! 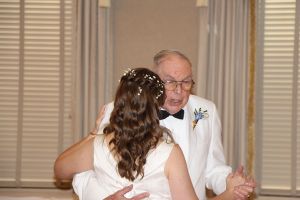 If that didn’t have you bawling yet, Carsten surprised Jenny by recording a song he sang himself, called “Beautiful You’, from the musical “Adventures in Love”.

And then we ate cake.

It was such a wonderful day, but even more special to welcome The Berndts into our family.

Next up:  To the beach!  Will Mark and Lynn Berndt survive a game of Taboo with the rabid Hart Family?  Will Bobby Siegel find a place to get me coffee in the mornings?  Tune in next time!